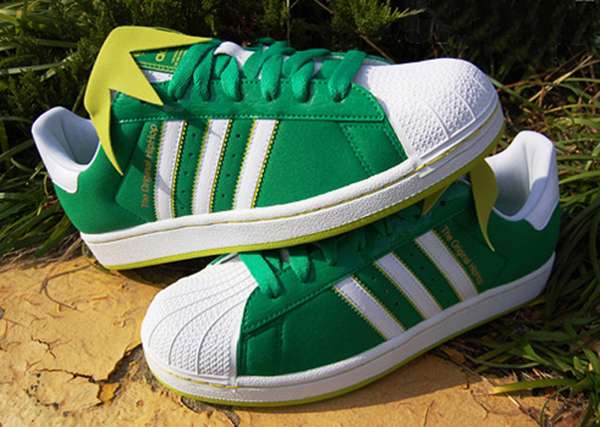 The Superstar II Kermit the Frog Sneakers are Bold

Taylor Keefe — November 10, 2011 — Fashion
References: adidas & eukicks
Share on Facebook Share on Twitter Share on LinkedIn Share on Pinterest
If The Muppets were a favorite show of yours growing up, then the Superstar II Kermit the Frog sneakers will have you feeling nostalgic. Adidas teams up with the Jim Henson brainchild, and most recognized Muppet, for a release of its classic shelltoes.

The Superstar II Kermit the Frog kicks are the second alliance between the sporting brand and the popular puppet. The first incarnation of this collaboration was done for the Stan Smith line. This time around, the vintage shelltoe collection is spearheading Kermit’s return to the mainstream (like he ever fell off).

The shelltoe version of the kicks contain much more Kermit-infused designs. The tongue is covered by a collar, similar to the one found around the neck of the puppet. A bright shade of green suede covers the shoes, with a lime green trim accenting the side stripes, outer sole and logo patches. The sneakers are finished with a crisp, white shelltoe made famous by rap group RUN-DMC.