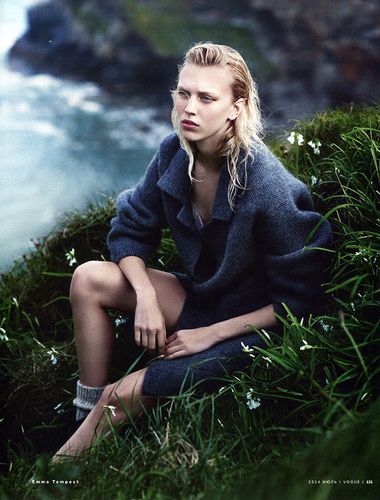 Jordy E — June 21, 2014 — Fashion
References: vogue.ru & fashioncopious.typepad
The Vogue Russia July 2014 Juliana Schurig photoshoot displays the model sprawled out amid rocks set on a dimly lit beach, much as one would expect from a shipwrecked seaman. Despite the natural of the earth backdrop, Tempest is nonetheless dressed head to toe in hate couture via the ensembles of stylist Camilla Pole.

Rather than dressing Schurig in bathing suits or swimwear, Pole opted for sturdy outerwear that viewers would expect for the Fall 2014 season. This choice was seen in long sweaters hanging low to the floor, grey one piece suits and a series of warm, oversize sweaters.