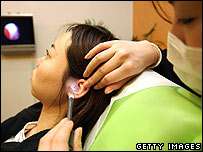 A small salon called Mimi Kurin (which means Ear Clean) recently opened near one of Tokyo's biggest train stations. A therapist will clean inside your ears with a special tool designed to do the job thoroughly but safely.

Now here's the bizarre part: the tool is equipped with a tiny camera, and you can watch what's happening inside your ears on a full-color television screen.

It doesn't sound pretty, but people are doing it. Maybe it's just such a novel idea that people are intrigued. Or maybe some people will race to try anything new.

Given a) the fact that it's new, and b) the salon's proximity to a busy Tokyo train station, it has become popular with Japanese businessmen looking to kill an hour before catching their next train or attending their next meeting.