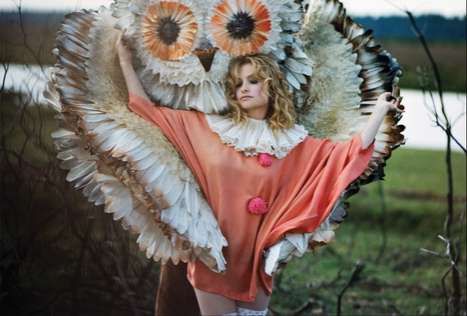 Ed White — April 2, 2008 — Marketing
References: vids.myspace
Share on Facebook Share on Twitter Share on LinkedIn Share on Pinterest
If there's one trend that's been sweeping promo and ad land over the last year or so it's in-camera extravaganzas, and no-one does them better than Colonel Blimp/Blink director Dougal Wilson, who's latest for Alison Goldfrapp, "Happiness" is a glorious hop, skip and jump... well alright, more of a jump, jump and a jump through London as a crisply white suited young gent cheers all around with his rhythmic pogo-ing.

What does it say? Well in an age of jaded, seen-it-all before punters bored of slick, dancing CG robots and such, directors are trying ever harder to stir a response from people. And nothing gets punters' CG saturated imagination going like a a bit old fashioned gumption, specifically a tricksy looking shoot. Look, you say, they actually did it for real! It's authentic! 'How did they do that?' you ask. 'Is it all one take?' 'How did they get him to hop in time for so long?' 'And how does Alison defy the laws of physics to keep cropping up in various outfits?'

Of course it's some clever directorial sleight of hand (it's fun trying to spot the 'wipes') and a great idea from music video maestro Wilson that makes this so charming and engaging, but perhaps more importantly it's getting you to lean forwards and ask those aforementioned questions that's interesting. Why? Because guess what, while you're asking you're not turning off/turning over or pressing that fast forward DVR button. Entertainment has always been the life blood of successful media outlets, but as music television wanes in popularity, competition rises and more things clamor for our attention that's just getting more refined - now we expect things to be difficult to pull off to boot. And if they're not? Well then we can turn off/turn over/do something else.

Bad news for media outlets who will have to mine yet deeper for good ideas, great news for you and me though as they try harder to get - and keep - our attention.
1.5
Score
Popularity
Activity
Freshness
View Innovation Webinars