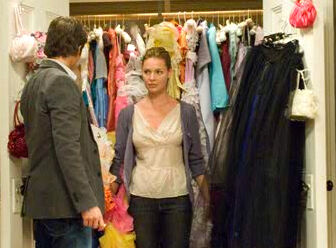 If an item of clothing is going to be made custom made for your body, in a style you look, why not wear it again?

27 Dresses has an all star cast of characters including Katherine Heigl, who plays Jane, a woman who is repeatedly a brides maid, but never a bride herself. The movie's title refers to the 27 bridesmaids dresses she's worn, including saris and kimonos. Jane soon realizes it would be a lot more economical to start recycling them.

More than being a plot in a movie, it reflects a real fashion trend happening today.

"The biggest trend in dresses for the bridal party is the wear-again dress," the New York Times quoted Ramona de la Rosa, the executive vice president for merchandising of David's Bridal. "A gown that is not in its essence a bridesmaid dress."

That means dresses that aren't necessarily reminiscent of old-fashioned ball gowns or prom dresses, but more like cocktail dresses that could be worn again to parties. Attributes in demand include plunging lines on both backs and fronts of dresses as well as highly detailed or customized looks.

Kyle Vucko, of Indochino, says there are an increasing amount of men seeking out suits that can be worn after the wedding as well. The online company creates tailored-made, designer-inspired suits, and although they suits are affordable, Vucko still finds many customers looking for suits that can easily be worn at other occasions, including at business affairs.

When it comes down to it, if someone, male or female, is going to spend that much on having a dress or suit tailored, they may as well have something created that can be worn again.