Custom Cartoons With Your Kid 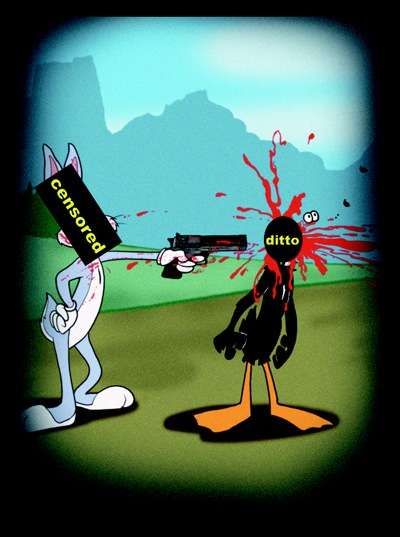 Pearl — October 3, 2008 — Art & Design
References: theaquariumonline & telegraph
Share on Facebook Share on Twitter Share on LinkedIn Share on Pinterest
British artist James Cauty is about to open his new exhibition “Splatter.” It is the first time the London’s Aquarium Gallery will have to put up a parental advisory warning sign. This is because the pictures he shows are the actual blood and gore consequences of what really happens to Looney Tunes characters.

One piece shows Bugs Bunny firing a gun at Daffy Duck and blowing off his head. In another, Tom chops up Jerry into small bits.  A third painting shows Sylvester the cat with a bloody mouth, presumably from eating Tweety Pie.

The idea for this controversial exhibition came from the artist’s 15-year-old son who suggested that his father show in his artwork what the cartoons fail to portray. Cauty added, “People have been saying since the ‘60s that cartoons should show the consequences of violence, or kids will get the wrong idea.”

The gallery expects the show to be a success. Gallery owner Steve Lowe said, “It’s amazing work, and from the reactions we’ve had to it so far, children have loved it. I’m not sure if their parents have been too happy about their children loving it, but kids were very excited by it all, which is interesting because art is never normally aimed at children.”

At the very least, the exhibition will encourage more dialogue about violence in the media.
5.6
Score
Popularity
Activity
Freshness
Get the 2021 Trend Report FREE