30 Gifts for the Wine Lover
Next
Set of
Related
Ideas 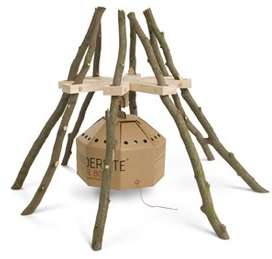 Elsa Blaine — August 17, 2008 — Eco
References: 100percentdesign & trendsnow.net
Share on Facebook Share on Twitter Share on LinkedIn Share on Pinterest
Imagine you’re enjoying a few days off from work in the summer of the year 2050. You’re feeling a little nostalgic for the ‘good old days’, back in say 2010, so you decide to do a little camping. You know, with the old nylon tent and sleeping bags. Just one problem, you “lack any basic survival skills” due to your high tech lifestyle in 2050, and the thought of having to start a campfire is utterly out of the question.

As a project for the Museum of Modern Britain’s (MOMB) 2050 retrospective exhibition that looks back on the years 2008 – 2038 Philip John Luscombe from the Northumbria University’s School of Design, has created the ‘Kinderlite’ disposable campfire.

It looks like the invention would make building a campfire an almost instant process. Just prop a few nice straight sticks into the central ‘spoke’ part, hang the cardboard carton, which likely contains kindling and other flammable fire starting substances, and light what looks to me to be a ‘fuse’. Ta-da campfire on the spot.


Although designed for the future, I think there would be a good market for his concept now though.
1.8
Score
Popularity
Activity
Freshness
Get the 2021 Trend Report FREE