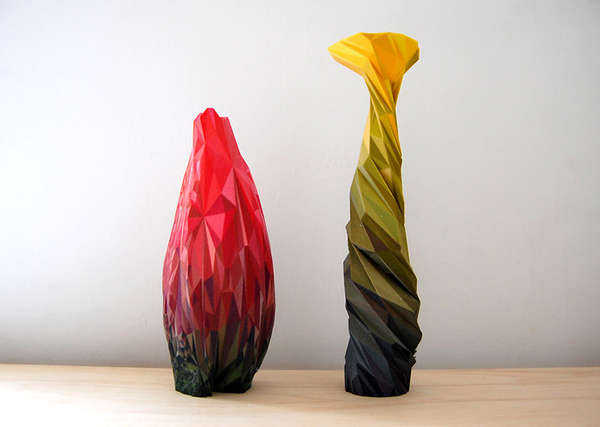 Meghan Young — October 16, 2012 — Art & Design
References: plummerfernandez & fastcodesign
Share on Facebook Share on Twitter Share on LinkedIn Share on Pinterest
The Digital Natives series looks as though it is comprised of containers that have undergone a colorful crystalline transformation. In reality, they all started out as mundane objects such as teapots and detergent bottles, which were then distorted digitally.

Designer Matthew Plummer-Fernandez, a graduate from the Royal College of Art, scanned the objects that resulted in the Digital Natives series with a camera to make a 3-D scan of the objects. From there, he applied some home-brewed algorithms to create new pieces out of colorful resin using a 3D printer. These algorithms are essentially glitches that Plummer-Fernandez is in control of.

Plummer-Fernandez says of the Digital Natives series, "When changing file format, or file-sharing, information sometimes gets corrupted. I liken this to a postcard arriving to its destination marked with stamps and creases. I find it adds aesthetic value, so I embrace the glitches and provoke them to occur."
1.1
Score
Popularity
Activity
Freshness
Attend Future Festival