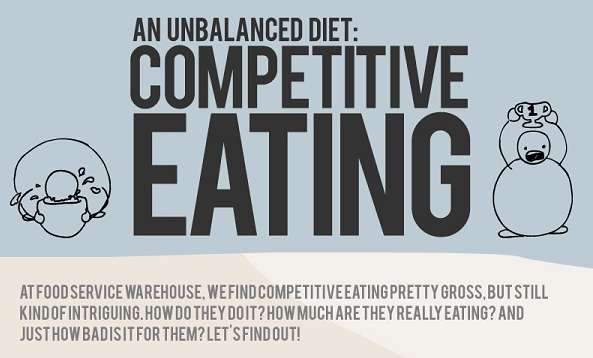 Marie C. Hudson — October 8, 2011 — Lifestyle
References: blog.foodservicewarehouse & dailyinfographic
Share on Facebook Share on Twitter Share on LinkedIn Share on Pinterest
I'll be the first to say there's no shame in going back for seconds, but the champions featured in the 'An Unbalanced Diet: Competitive Eating' infographic go far beyond one more helping. Created by Food Service Warehouse, the illustrated chart looks at some of the world's food-eating winners, and compares the amount of food ingested by the champions with daily portions consumed by the average individual.

Though I'd heard of competitive hot dog eating before, the stats on competitive mayonnaise eating was definitely news to me. Even more shocking is that the amount of mayo consumed by champion Oleg Zhornitskiy, nine jars, converts to enough energy for a Toyota Prius to travel 45 miles.

After seeing the Competitive Eating infographic, I have a new-found respect, or maybe amazement, for the health-hazard sport.
2.8
Score
Popularity
Activity
Freshness
Get Better and Faster