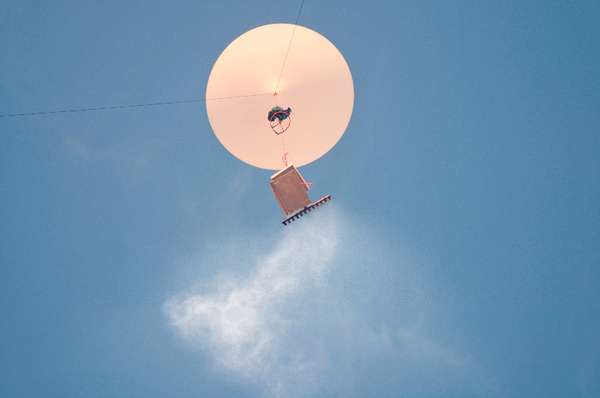 Meghan Young — January 18, 2013 — Tech
References: gravitytrap & psfk
Share on Facebook Share on Twitter Share on LinkedIn Share on Pinterest
The Cloud Machine is just what it sounds like, a machine that makes clouds. While controlling the weather might be a controversial undertaking, modifying it slightly is nothing to worry about. Especially when done in the name of art. In this case, the Cloud Machine makes small spurts of random clouds in the sky, which won't drastically change the weather.

Created by media artist, designer and animator Karolina Sobecka, the Cloud Machine lifts into the air via a balloon. Once it reaches a certain altitude, it disperses Cloud Condensation Nuclei, heat, and water vapor, which condenses moisture in the air into cloud droplets around the CCN to create small clouds. According to the artist, the Cloud Machine was inspired by "a geo-engineering technique proposed to create brighter, more reflective clouds which shield earth from sun’s radiation, and thus partly counteract the climate change."
1.8
Score
Popularity
Activity
Freshness
Attend Future Festival