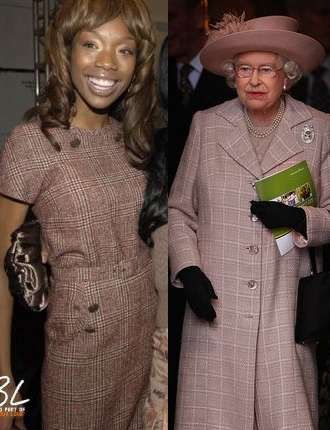 Marie C. Hudson — December 1, 2011 — Pop Culture
References: celebsthatcopybrandy.tumblr & celebsthatcopybrandy.tumblr
Share on Facebook Share on Twitter Share on LinkedIn Share on Pinterest
If the phrase, "The boy is mine," means very little to you, and you've never even heard of the sitcom 'Moesha,' the 'Celebs That Copy Brandy' blog might leave you feeling slightly confused -- but, if you were lucky enough to grow up in the '90s, and can still along to Brandy's 1998 hit 'Top of the World,' this hilarious Tumblr is right up your alley.

Created in January 2011, the blog features shots of various celebs in poses and clothing that bare a close resemblance to the R&B singer and actress. While the site shouldn't be taken too seriously, there are some hilarious similarities that will keep you coming back for more -- particularly those between Brandy and the Queen of England.

As someone who has seen one too many episodes of Moesha, I am extremely thankful for this blog's existence. Check out 'Celebs That Copy Brandy' for a side-splitting jaunt back to the '90s.
2.6
Score
Popularity
Activity
Freshness
Access Advisory Services