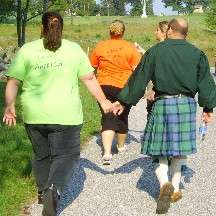 After deciding she needed to makes some changes in her life, Priscilla made up her mind to become more conscious of her health, from eating better to exercising more. She said she felt like she was eating herself to death, and even simple things like tying her shoes had become a chore.

In a press release issued by Priscilla she said, â€œUntil a person can see that there is no magic pill or quick cure, that the answer is within themselves, the light will not come on over your head.â€ She adds, â€œGet your head right and your body will follow.â€

The couple plans to walk and bike 16,000 miles across the United States to raise awareness for obesity. Currently on day 82, they offer updates on their 6-8 hour daily journeys on their website. Included in their daily blog are tidbits on where they are, who they have met and the challenges they have overcome.

March 6, 2007 marked their 1,000th mile. It was also a day that brought them face to face with their own mortality. Priscilla blogged about her near-death experience and included a poem about the close call she encountered with a truck while on her bicycle.

43 Wicked Walking Innovations
Using Your Legs, from $150,000 Canes to the Moonwalk