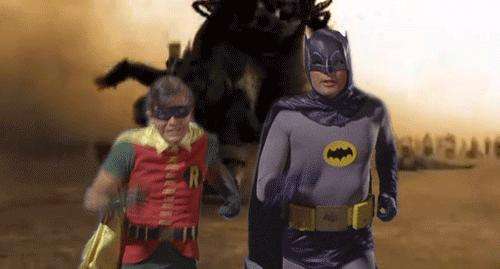 The 'Batman Running Away From Shit' Tumblr Features Hilarious GIFs

Jason Soy — November 24, 2011 — Pop Culture
References: thatdesignbastard.prosite & batmanrunningawayfromshit.tumblr
Share on Facebook Share on Twitter Share on LinkedIn Share on Pinterest
I used to think old episodes of Adam West's Batman TV series were hilarious enough on their own, but this 'Batman Running Away From Shit' Tumblr amplifies the already inherent comedy of the retro caped crusader series by having Batman and Robin seemingly running away from the most random of things.

For instance, in this month alone, followers of the blog can see the image of a running Batman superimposed onto scenes from the movies 300, Pink Floyd's The Wall, The Dark Knight, Rocky and even Zoolander. There's literally dozens of these GIF files to behold.

The 'Batman Running Away From Shit' Tumblr is the pet project of Roberto Salvador, who's a talented Graphic Designer in addition to his duties of hilarity purveyance. If Salvador continues to provide viewers with quality animated GIFs, his blog will no doubt become a viral hit.
6.3
Score
Popularity
Activity
Freshness
Access Advisory Services