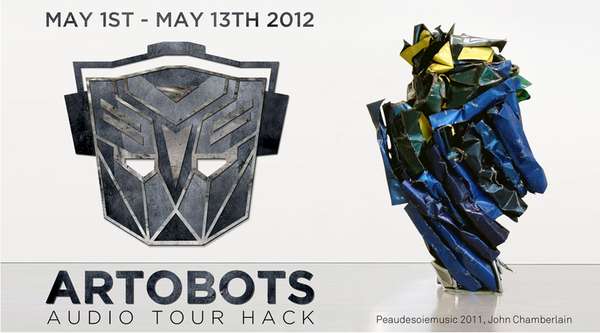 Jordy E — May 12, 2012 — Art & Design
References: audiotourhack
The 'Artobots' Audio Tour Hack is now available at New York's Guggenheim museum. The track is meant to commemorate the iconic work of the critically acclaimed sculptor John Chamberlain. The American has been revered for his work with old automobiles, creating ornate art pieces with discarded, rusted or dysfunctional vehicles. As these configurations resemble the Transformers canon, this tape offers an aural review of his work that is in aligned with the major entertainment franchise.

The Artobots soundtrack applies a fictional tale to the work of Chamberlain. The phonic sounds elaborate upon the tale of the Autobot demise, a group defeated by the Decepticons. Those who tune in to the performance can download the stream via smartphone tools, making the artistic production easily accessible for artistic enthusiasts.