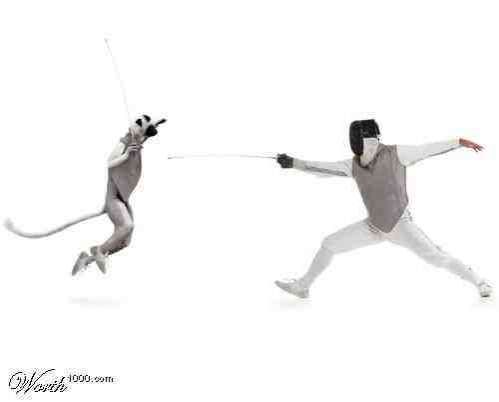 So jealous were the other creatures with the success of the Guinea Pig Olympics, it seems, they just had to get in on the act. Talk about stealing their thunder. The array of animals that took part in the Animal Olympics would do Noah's Arc justice!

Here are my top ten out of the many images on Worth1000.com.

The quality of photoshopping is not a great as seen on other posts, but I have chosen carefully for your viewing pleasure.

1) Fencing Lemur - how can this not make you smile?
2) Frog Wheelchair Race - so wrong and too obvious to make frog leg jokes
3) Shark swimming - inspired idea
4) Skiing Squirrel - I guess their bodies would help them do well at this event
5) Long jump panda - Panda's rock, so anything featuring these is good by me
6) Boxing bug - I guess they would take park in the feather weight class
7) Swimming tiger - I love its hat!
8) Ice Hockey Toad - not the best photoshop magic, but a great looking toad
9) Gymnastic pussy - so bad, it's good
10) Cat in Helmet - shoe horning this one in (sorry), I know technically F1 does not count
2.3
Score
Popularity
Activity
Freshness
View Innovation Webinars