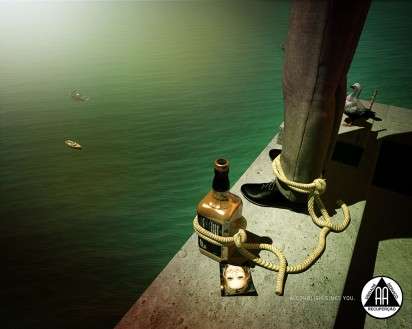 Meghan Young — April 11, 2012 — Lifestyle
References: coletivodedois & ibelieveinadv
Conceived and executed by Coletivodedois, an ad agency based in São Paulo, Brazil, the AA Unidade Servico Recupercao ad campaign shows that “Alcoholism sinks you," as stated in the tag line. It takes a classic scene often associated with either the mob or suicide and gives it an alcoholic twist. Captured at a dock, it depicts a bottle of liquor tied to the leg of the drinker with a rope in place of a heavy cinderblock.

Art directed by James Williams with creative direction by Leonardo Parnes and James Williams, the AA Unidade Servico Recupercao ad campaign was illustrated by gustavo3dg. A depressing set of print ads, it shows just how devastating drinking can be.
3.3
Score
Popularity
Activity
Freshness