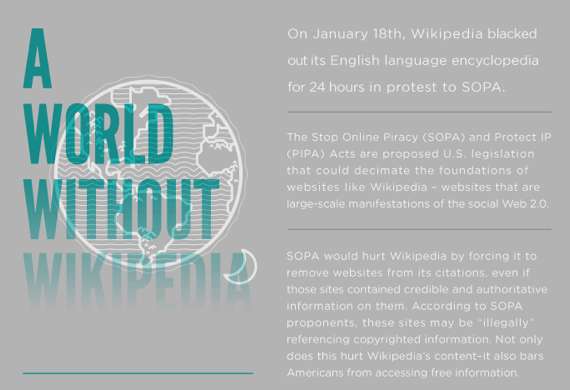 'A World Without Wikipedia' Examines the SOPA Protest

Marie C. Hudson — January 25, 2012 — Pop Culture
References: onlineuniversity.net & dailyinfographic
Share on Facebook Share on Twitter Share on LinkedIn Share on Pinterest
The Internet is an incredibly popular source of information for scholars and the general public, which is why a potential permanent blackout of one of the world's largest free online encyclopedias bares disastrous consequences, as shown by 'A World Without Wikipedia.'

Created by Online University, the infographic explains the effects of Wikipedia's blackout on January 18, 2012, in protest of SOPA -- the Stop Online Piracy Act -- that, if passed, would force Wikipedia to remove all sources and copyrighted information from its articles. As the illustrated graph shows, the shutdown of the English language Wikipedia would affect the 744,572 writers currently working on its English articles, not to mention the millions of web users who read the information.

While online piracy is an important issue, A World Without Wikipedia shows that there must be a better way to regulate the sharing of copyrighted material online, without affecting the public's ability to access a world of knowledge and information for free.
0.5
Score
Popularity
Activity
Freshness
Get the 2021 Trend Report FREE