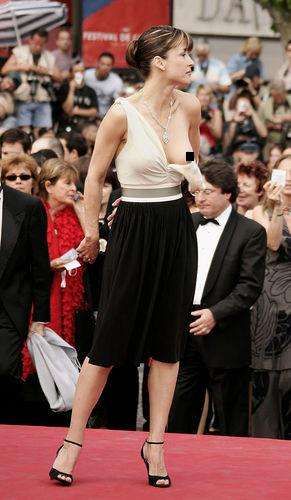 Needless to say, celebrities are in no way exempt from having their own wardrobe mishaps. As a matter of fact, when A-listers such as the French actress Sophie Marceau (first image on our gallery) suffer a serious wardrobe disaster such as the one we can see above, the paparazzi will be there clicking away to make sure the whole world is made privy to this involuntary and embarrassing case of rack spillage which also victimized, albeit to a lesser extent, Jessica Simpson, Tara Reid, Mischa Barton and Scarlet Johansson.

Beyonce Knowles, with her revealing and mischievous (and I imagine quite drafty) dress, was also on the hit list as was former Miss Universe Cherry Hawkins whose blue skirt dropped to the floor leaving the shocked and awed beauty queen in her drab red thongs right in the middle of a catwalk.