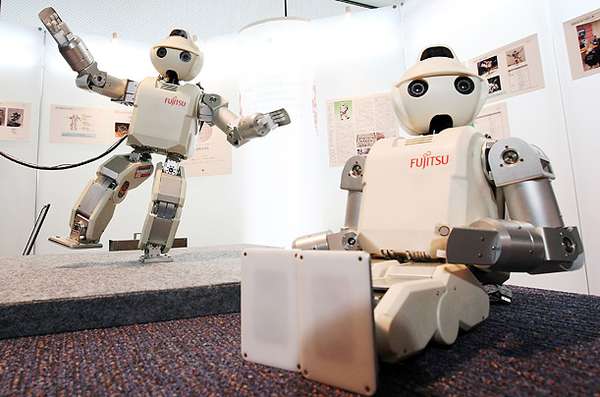 From Weight Lifters to Camel Riders

Here are my picks of the 10 most adorable bots:

Chummy: The Fujitsu's HOAP-3 robot walks, grasps objects and can even carry on a simple conversation.

Little Bugger: This little robotic wine-expert can identify the flavor and brand of a wine via infrared rays. The Sommelier Robot then uses this information to recommend which dish would best suit that wine.

Kiss the Bride: "Tiro" the robot served as master of ceremonies at a wedding for one of its engineers.

Soft Touch: Dexterous hand robot by The Shadow Robot Company holds an apple at the Science Museum in London.

Swan Song: "Violin-Playing Robot" by Toyota plays a tune at the Universal Design Showcase in Tokyo.

Line Up: Robots perform the "Thousand-Hand Bodhisattva" dance in Nanjing, China. Thewe eight robots, each measuring ten inches in height, were made by a working group from the University of Science and Technology of China.

Red Rider: An adventurous robot jockey rides a camel before a race in Dubai. The $300,000 robots are controlled by the camel's owners from the sidelines. They are feature shock absorbers and GPS tracking systems.


See an awesome lego model of the loveable WALL-E, which is out in theaters on June 27.: