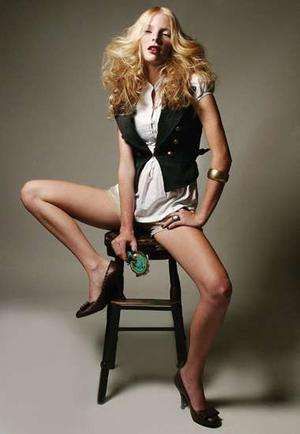 “You want to make your stamp with someone fresh, not with a model who has done a million other jobs,” says a stylist who prefers to remain anonymous.

However, it seems that designers simply want to capitalise on the innocence of such models.

“The thinking goes that women want to buy into the fantasy of being impossibly young and impossibly skinny,” says a casting director, who also asked not to be named.

Some are keen to pin the blame on fashion’s gay camp.

“The fashion industry is 70 per cent gay men, and their opinion far outweighs the 30 per cent of women and straight men,” says another international stylist. “Projecting that little-boy fantasy is one that gay designers go back to more and more.”

Others are tiring of an industry that seems to represent the needs of the end consumer less and less, “It’s children trying to work women’s clothes. It just doesn’t match the brands - you need a bit of a hip for the clothes to hang properly. The fantasy is wearing a bit thin.”
3.4
Score
Popularity
Activity
Freshness
Get the 2021 Trend Report FREE