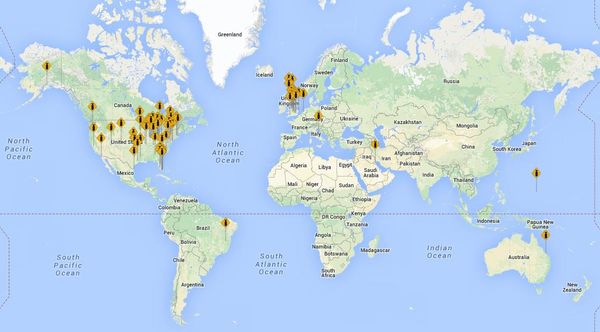 Vasiliki Marapas — November 11, 2013 — Pop Culture
References: fbomb.co & washingtonpost
Share on Facebook Share on Twitter Share on LinkedIn Share on Pinterest
Carleton University student Martin Gingras created an interactive Twitter map that plots when and where people are dropping F-bombs on the web. So who are the main culprits of Potty Mouth? English speaking countries like U.S. and Britain are most likely to swear on their Twitter accounts. Canadians, on the other hand, lived up to their polite reputation, with a significantly lower amount of f**ks given on their social media.

The map also reveals some illuminating details: people are most likely to tweet obscenely between the hours of 12 to 6 pm on a weekday. Sounds like people all over the world have a tendency to experience bad cases of the f**king Mondays (and Tuesdays, and Wednesdays...).

If you find yourself swearing like a sailor, don't worry -- you're not alone. Opening fbomb.co reveals your international neighbors also have a penchant for profane tweeting.