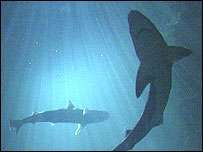 Seriously. I'm not making this up.

British magazine The New Scientist reports that the scientists plan to control the sharks remotely by implanting electrodes in their brains. They will then "exploit sharks' natural ability to glide through the water, sense delicate electrical gradients and follow chemical trails."

According to the magazine, "...remote-controlled sharks do have advantages that robotic underwater surveillance vehicles just cannot match: they are silent, and they power themselves."

The project, which is funded by the Pentagon's Defence Advanced Research Projects Agency (DARPA), leverages brain implant technology that already allows scientists to control the movements of fish, rats and monkeys.

"Neural implants consists of a series of electrodes that are embedded into the animal's brain," states the magazine, "which can then be used to stimulate various functional areas."

The next step will be to release blue sharks with the implanted technology off the coast of Florida. Since radio signals cannot penetrate the sea, scientists will communicate with the sharks by sonar.

No plans have yet been revealed to implant these devices in human brains, although one has to wonder about the possibilities...
4.8
Score
Popularity
Activity
Freshness
Access Advisory Services