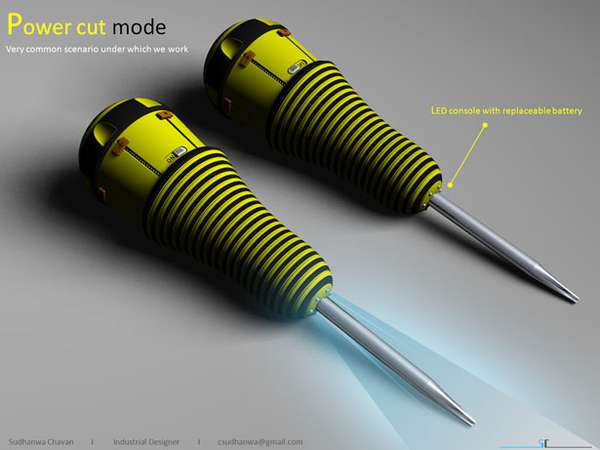 Amelia Roblin — July 12, 2012 — Art & Design
References: coroflot & tuvie
Despite the fact that tools have been developing and evolving over 2 million years, many standard implements have been unchanged for some time -- not necessarily existing as perfect utensils for accomplishing their prescribed tasks. The designer of the Screw U Screwdriver became fed up with the shortcomings of the contemporary toolbox and has proposed some improvements for one of the handiest of the lot.

Similar to some of the newer apparatuses on the market, this product has a selection of different bits stored inside its superbly ergonomic handle. Sudhanwa Chavan's creation has six, to be exact, of different shapes and sizes to accommodate a wide variety of screw heads and handyman jobs.

The nibs are labeled with symbols on button tabs that the user can slide down to reveal. Most notably, the Screw U Screwdriver is equipped with LEDs to operate as a focused flashlight under dim conditions.
3.6
Score
Popularity
Activity
Freshness