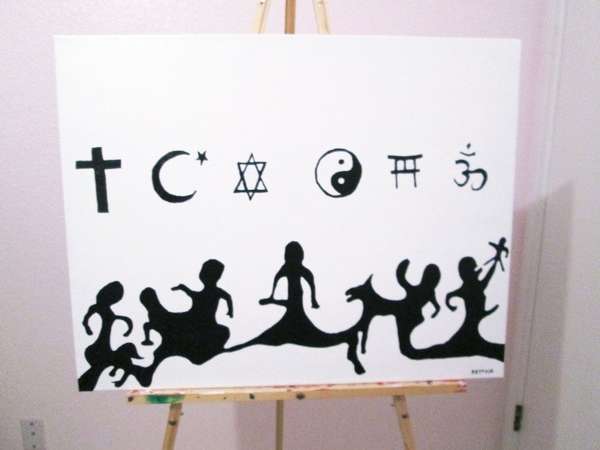 The Peter Reynosa Madonna Paintings Explores Her Many Sides

Sarah Nazim — June 27, 2012 — Pop Culture
References: myseveralpaintings.blogspot & celebritysmackblog
Share on Facebook Share on Twitter Share on LinkedIn Share on Pinterest
The Peter Reynosa Madonna Paintings explores the pop-stars many sides, from the loving Madonna to the over-the-top controversial one. Reynosa uses symbolism to depict what he is trying to convey about her, so although the paintings are about Madonna, there is no actual portrait of her used.

Since Madonna is a Cabala believer (they believe that one can become one with God) Reynosa decided to depict this in a sexual manner by having a male and female intertwined, as seen in the black, red and white painting. The photo with the huge footprint has an upside down cross that symbolises her blasphemy, while the upside down pentagram means she is evil, and the three dots means she is holy.

The nice thing about Reynosa's work is that although he is conveying what he sees in Madonna as a person, his works can be interpreted differently and can apply to many different people's situations, which makes for versatile pieces of art work.
1.8
Score
Popularity
Activity
Freshness
View Innovation Webinars