Top 35 Architecture Trends in February
Next
Set of
Related
Ideas 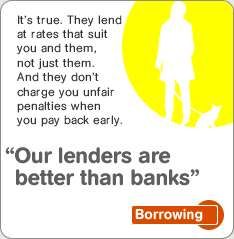 Cheaper Lending and Borrowing Without Banks!

Trend Spotter — May 2, 2006 — Business
References: zopa & gizmag
Share on Facebook Share on Twitter Share on LinkedIn Share on Pinterest
Disintermediation is a term you'll no doubt have heard and will certainly be hearing a lot more in the future. It means â€œto remove the middle manâ€, and it's something the internet is incredibly good at. With close to a billion people connecting to the internet in the last decade, and computer-mediated anything just a few minutes of Googling away, radical new ideas can promulgate very quickly. And here's one you're gonna love : think of it as P2P money. Zopa hooks up creditworthy people who want to borrow money with people who are happy to lend it to them. And because there's no middleman (e.g. bank), the borrower just pays a 1% exchange fee upfront. Without the greed and inefficiency of a financial institutuion, both borrower and lender get a better deal than they would otherwise.

For borrowers, the money is cheaper. For lenders, there are no fees, better returns and the facility to manage the risk and seek even higher returns.

If there were a popularity poll for organizations, banks and most other financial institutions would rate towards the bottom of the list, somewhere between monopoly Telcos and the Royal Institute of Executioners â€“ which is why we think Zopa's new angle on democratising the lending of money makes so much sense and will garner such a favourable reaction from so many people.