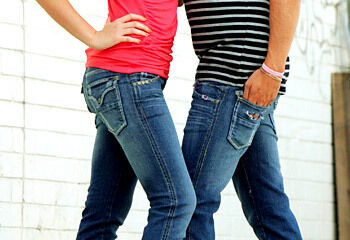 “We’re finding lots of blokes buying and wearing our skinny, stove-pipe style as they’ve found it hard to find jeans that tight and that comfy on the men’s racks," says Sass and Bide co-founder Sarah-Jane Clarke. “The blokes tend to be super skinny guys who like the comfort factor, probably because there is extra lycra used in female styles.

“Most of our male customers end up wearing our female size 14."

Ms. Clarke says their new higher-waisted style is being snapped up by blokes too, “They’re buying them oversized and wearing them quite low," she adds.

The fad isn’t just an underground move by gay boys and fashion victims. The mega Diesel brand has been quick to capitalize on the boys-wearing-girls market.

“We had lots of guys buying our girls’ skinny jeans that head office in Italy decided to design a skinny leg pair for boys," says Deisel’s retail chief, Amanda Clune. “Our feedback was so strong our Italian design team designed a style called Thanaz, a skinny leg jean just for the male market."

But this skinny jean trend hasn’t just popped out of nowhere, with old rockers pouring on tight jeans well before today’s femme-inspired fashion incarnation. It started in the ‘50s with stove-pipe pants, when The Beatles, Buddy Holly and Australian legend Johnny O’Keefe strutted the stage in their ground-breaking slim-line look. Albeit topped off with a finely tailored jacket, skinny tie and neat haircut. A decade later and the look evolved with Mick Jagger, Rod Stewart, Keith Richards and Iggy Pop, who never let their tight pants and tighter singlets get in the way of a good performance. Latter-day rock gods such as the late Michael Hutchence, Axel Rose and Jon Bon Jovi went on to adopt the formula proving, perhaps, that it never really went out of style.
6.4
Score
Popularity
Activity
Freshness
Attend Future Festival Virtual