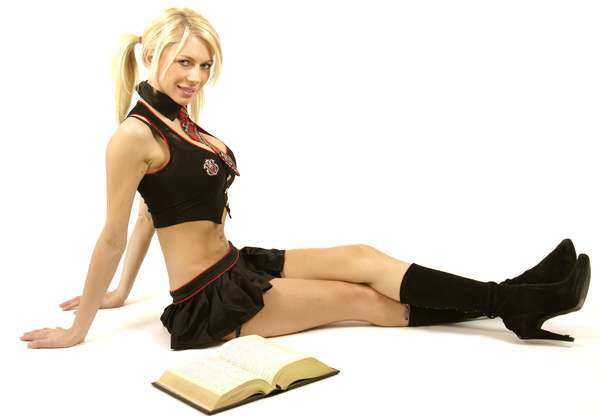 Seemingly simple, and yet Marina Orlova has a way of making words, well, hot. Now she has a book coming out, aptly named “Hot for Words,” and is taking over the Internet one word at a time. Here she talks about the role of cool hunting in her work.

1. How did you start Hot for Words and what motivates you to continue?

Since I have two degrees in philology which is the study of the origins of language and the origins of words, I figured that it would be best to do something career-wise that I knew something about and that I had a passion for.  I was a teacher briefly in Russia teaching a class of about 20 kids, but when I came to the United States and was introduced to YouTube, I thought, wow, wouldn’t it be great if I taught online to perhaps thousands of people.. plus I wasn’t aware of anybody else doing what I was doing.. so that made it even more exciting for me!

When I got my first thousand views I was thrilled..  and that motivated me to keep making videos.. then I got a couple hundred thousand views which was more views than people in my hometown in Russia and that made me even more excited!  Today I am at 210 MILLION views and those numbers are just staggering!  I get between a half a million to a million video views every single day and those views translate into thousands of comments and emails every day as well.  It’s the sheer magnitude of the number of views each day and the number of comments and emails that I get, that really inspires me to keep making videos day in and day out!

Well, a trend today would be the general direction that something tends to move, but when you look at the origin of the word, it originally meant a round ball or the bending away of something.  It’s almost as if a trend is the shifting in the direction of something away from the norm.. and like a ball, once it starts rolling, it’s hard to stop.

What I find interesting in this original meaning, is that, the bending away symbolizes to me that if you want to spot a trend or start a trend, you need to shift your direction away from the norm, which almost seems contradictory, as a trend ultimately means that everyone is shifting in that direction.

I know that when I started making videos online, everyone said that video online was a losing proposition, so I didn’t listen and went against them, and made videos, and now you could say that I am a trendsetter because video online is now so popular, but when I started, it wasn’t.  So knowing the origin of the word trend can actually help you become a trendsetter!

Cool, obviously means, slightly cold, but as far back as the year 1000 AD or so, it also meant to cool yourself down emotionally, not to be emotional and that’s the meaning Chaucer and Shakespeare also adopted with the word.  To me, being cool means being relaxed, keeping your emotions intact during tough times.  Because a person who is cool during a tough situation looks great and people aspire to be cool like that person, cool has also taken on the meaning of not only someone who looks and acts great, but things as well.

4. Do you need a culture of innovation to create something that is cool?

All you need is the culture of the Internet to create something cool. In the past you had to convince a company to make your product and the people within those companies may have not been “cool” enough to realize how great your product was.  Today we have the Internet which reaches out to the whole world and to so many billions of people.

All you have to do today is make videos describing what you have and post them to websites like YouTube and eventually other “cool” people will see your video and pass it on to their friends, and before you know it, your idea has spread throughout the whole world.  The Internet allows these purely COOL ideas to spread like wildfire.

5. What is the best way to create an infectious idea, product or service?

I believe that making videos that either promote your product, describe your product, or feature your product, are amazing vehicles for creating awareness of your product.  Because companies like YouTube pay for the expense of streaming your video all over the world, your only expense is to shoot a video, edit it, upload it and promote it online.  A single person can upload a video and then let others know about it online which can help it be seen by thousands and thousand of people once others share links to the video as well.

I promoted myself and drove my videos to be seen over 210 million times.  If I can do it as a single person from my apartment, so can anyone.  But the key is to make sure your videos are interesting.  If they are not, then they won’t spread virally.

6. What is the key to innovation?

Innovation comes from the Latin meaning “to renew or change.”  So I believe the key is to create something new or go about something in a totally new of different manner.  When people around you tell you that they think your idea is stupid, that’s almost a sign that you absolutely NEED to do it!  I had NOBODY around me thinking what I was doing was a good idea, and now all those naysayers are hitting me up for advice on launching their own things that are based on what I do.

7. What is the most important trend you see in your industry?

One of the most successful shows on YouTube a few years ago was called LonelyGirl15 and was apparently just a 15 year old girl making videos in her bedroom.  Once it was exposed that it was actually a produced show by major people in Hollywood, it died a very rapid death. But what this shows you, is you don’t need to spend a lot of money to be successful on YouTube.. in fact, you are better off spending hardly ANY money.. just focus on the content and you can do VERY well. Spend too much money and you end up shooting yourself in the foot!  Crazy huh?

8. What are your ambitions for Hot for Words?

I have a book that came out on August 15th through Harper Collins called “Hot for Words,” I have an awesome iPhone game coming out that is completely NOT what you would expect and I am creating a game show for online based on my show.  But my future is to keep making the videos online that I am making.  All of Hollywood and the world is shifting to the Internet, TV is shifting here as well.  And since I am already here, it means that things can only grow for me in the future.

9. How do you reset yourself to be creative? Do you have any rituals?

Since I make about 7 videos a week, I have to be creative all the time.  But I find that the fact that I MAKE myself write the scripts FORCES me to be creative!  Creating really difficult deadlines for myself PREVENTS me from procrastinating.

I find that if I have too much time to do something, I always wait ‘til the last minute to complete it!  I know a LOT of people are like that.. putting off things until the last minute.  So if you are like me and do that, then create tough deadlines for yourself and you won’t be able to procrastinate at all.  And, believe it or not, even under a deadline, you can be as creative, if not more creative, than you can be with all this time on your hands!

10. Professionally, what do you want to be doing in 10 years?

11. What are your most important hobbies?

Since etymology was my hobby and I made it into my career, I find that most of my time is spent doing SOMETHING related to my career!  It’s the best of both worlds!  Take your interest or hobby and turn it into your career and will find yourself “playing” all the time and getting paid for it!!!
6.9
Score
Popularity
Activity
Freshness
Jeremy Gutsche Keynote Speaker