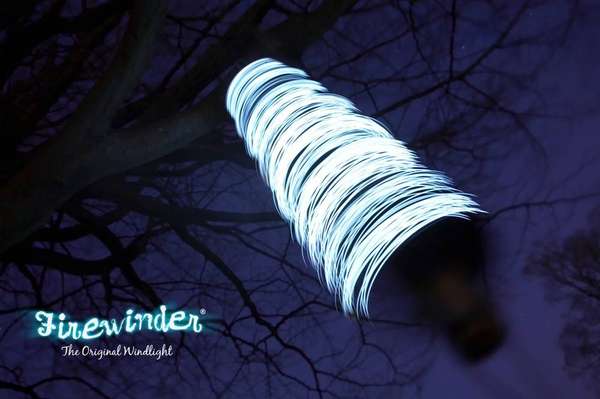 IdeaMan — February 24, 2008 — Eco
References: firewinder & firewinder
Share on Facebook Share on Twitter Share on LinkedIn Share on Pinterest
Firewinder is an outdoor light decoration that turns in the wind due to its helix shape, regardless of wind direction. Wind speeds as low as 3 mph will start the device to spinning and the LED lights to begin glowing. The Firewinder can hang from a tree or roof, or can be mounted on a pole. All it needs is wind to operate. Developed by British inventor Tom Lawton, the concept for Firewinder was inspired by imagining what it would be light to actually see the wind as he listened to it blowing through the garden during his childhood. Later in life, he took that dream a step further and started trying to devise a way to convert the wind into light. Drawing upon concepts and technology from Faraday and Savonius, and even aesthetically influenced by a Buddhist teacher in Indonesia, the Firewinder was designed and developed over a period of six years. Nearing commercial availability, the company is now accepting pre-orders for shipment this summer.

This self-powered light would make a very interesting garden statement, especially strategically placed. I would think you would want it far enough away that you can't see the actual LED light spinning or the means of support, but rather, to make it appear to dance in the darkness almost as if by magic.