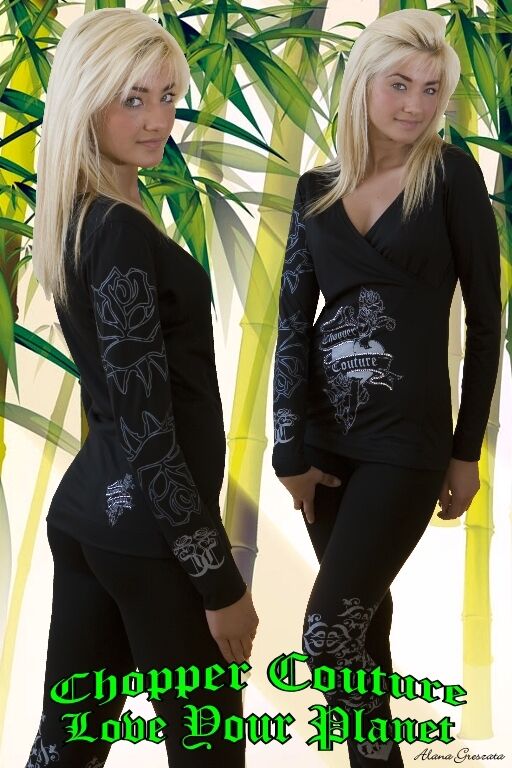 Forget the grainy hemp T-shirts and grunge of hippie wear typically associated with organic clothes for the granola set!

Consumers worried about ingesting harmful pesticides have long been purchasing organic foods. But the philosophy is now hitting home with clothing retailers and consumers as experts warn about the dangers pesticides pose to the environment.

Contrary to popular perception, cotton clothes are not healthy for the environment whereas bamboo and Lyocell are, says Toronto-based fashion designer Irene Zingenberg.

A yoga devotee with long blonde hair and lots of attitude, Zingenberg looks years younger than 47. She talks about Al Gore's movie on global warming and other environmental issues at her downtown Toronto design studio, where she's showing her Chopper Couture eco-fashion collection.

Irene Zingenberg highlighted the fact that textile industry is second only to chemical industry in causing environmental pollution world-wide. "But this is often overlooked," she explains. "The production and disposal of cotton clothes are harmful to environment, while Bamboo is bio-degradable." Over 22% of all pesticides used in agriculture are on cotton crops, grown on just 3% of the total farmland.
It takes about a third a pound of pesticides to produce one cotton T-shirt. About 180 to 300 pounds of chemical fertilizer is used on one acre of cotton in the U.S. About 90 percent of the chemical fertilizer doesn't stay with the plant, but washes off, ending up in water supplies and habitat, says Zingenberg. "If we get a large amount of cotton production for textile moved to bamboo and eco-friendly Lyocell, we'll also end up expanding the world's access to organic food supply," Zingenberg said.

Even as cotton slowly degrades in landfills, cotton clothes release methane gas, a key greenhouse gas aggravating global warming. It is estimated that well over half a million tons of cotton textiles are ending up in the landfills every year in Canada alone. "The only stage where cotton clothes don't cause problems is the middle phase, when they are being worn, but still they require more intensive laundering and ironing than bamboo or Lyocell clothes," she maintained. Apart from all the chemicals used in the textile production process, garments made from cotton also contribute to carbon emission when they are washed too hot, too often and tumble-dried.
Though more retailers are considering organic cotton, it currently makes up for less than one percent of cotton produced in the world. Designers like Irene Zingenberg have therefore chosen the more readily available and luxuriously soft eco-textiles made from either bamboo or Lyocell for her Chopper Couture eco-fashion.

Whether shoppers are buying eco-friendly because it's trendy or because they hope to preserve Mother Earth, they no longer have to sacrifice fashion for philosophy. With Irene Zingenberg's Chopper Couture trailblazing this progressive eco-fashion there's now something exciting for eco-fashionistas in 2007.

Costs of bamboo and Lyocell are slightly higher, but comparable to premium cottons. The look and feel of the clothes is so fashion-forward that many of her clients don't even realize they're buying organic. They just like the style, says Zingenberg, a perfect spokesperson for eco-fashion.

Chopper Couture's Fall 2007 collection of upscale street wear "Rock Royale" is Irene Zingenberg's inspirational reflection back to the religion of the Diva's of Rock & Roll. This collection celebrates all of the female Rock Royalty known through several Mother and Daughter generations. All garments are hand finished one by one and this couture line is not only a tribute to fashion, it is a tribute to a complex, colourful, rockin' earth giving eco-fashion an edgy look and a slammin' attitude with the message that Eco-fashion can be glamorous, sassy and sexy!

Irene Zingenberg founded her company in 1992 with "Body Active" a successful fitness line back when organic wear was little more than a hemp seed. "It was frumpy and boxy and crunchy and all those things people don't want," Zingenberg said of older organic clothing. "The consumer is ready and the seed was planted with organic food and beauty products." Other high-end designers like Oscar de la Renta, Diane von Furstenberg and Stella McCartney are including organic fabrics in their collections and celebrity entrepreneurs are also joining the trend. U2's Bono launched his socially conscious clothing line, Edun, in 2005 in an attempt to increase trade and create sustainable employment in countries like Africa.

Chopper Couture's most recent collection Fall 2007's "Rock Royale" includes the "Eco-Revolution!" fashion top made specifically for the United Nations Association affiliated: "Fashion Fights Poverty" with this year's benefit being Aid to Artisans with the intent to highlight how socially responsible and eco-friendly clothing can be progressive, art-driven and fashion forward.

With celebrities endorsing hybrid cars, vegetarian diets and launching their own eco-friendly clothing lines, experts say it was only a matter of time before the Hollywood trend caught on with fashion. "It clearly has gotten more attention now because it's not just an industry sector. It's a global phenomenon," says Zingenberg. "We're seeing it in cars, we're seeing it in homes products, food and now apparel." She says consumers are willing to spend just a little more for eco-friendly products like organic clothes.

Retailers say it's not just about buying organic, it's about the entire process. Chopper Couture uses organic inks totally free of environmentally harmful PVC and Phthalate for their art-driven silk-screen prints. Being organic also means fair-trade practices easily achieved by Chopper Couture as all production takes place in Green Toronto!