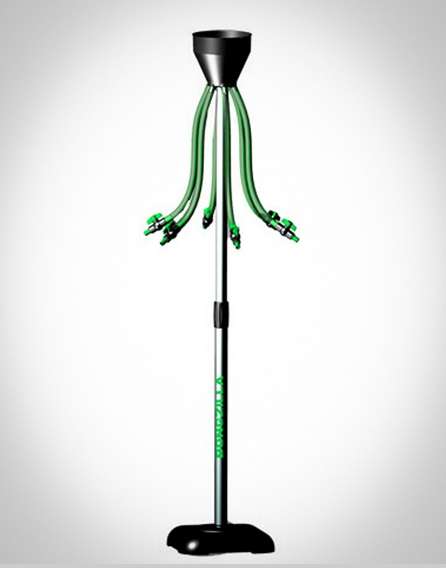 Amanda Greer — May 15, 2013 — Pop Culture
References: spencersonline
Beer funnels are known for livening up any dull party but are usually restricted to single-person use. The 'Bongzilla Beer Bong,' however, takes that one-at-a-time nonsense and crushes it by allowing six people at a time to funnel beer.

The 'Bongzilla Beer Bong' is basically a funnel located at the top of a pole. Six tubes, complete with nozzles, lead from the funnel's body allowing you and five of your friends to enjoy the camaraderie of simultaneous beer-drinking.

The funnel itself can hold 12 cans of beer, but the nozzles attached to each of the tubes give the partier the option of taking a break instead of losing control. The 'Bongzilla Beer Bong' is also adjustable; its is pole able to move up or down to accommodate even the smallest or tallest of drinkers.

This newfangled drinking contraption is sure to get the party going no matter the occasion.
4.8
Score
Popularity
Activity
Freshness

30 Gifts for Stoners
From Cannabis Cookie Cutters to Drinkable Marijuana