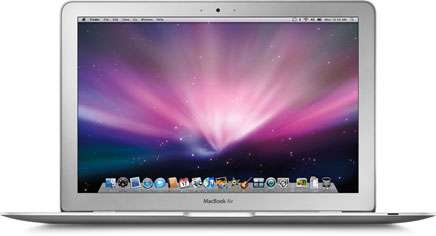 Both the iPhone and iPod Touch have been updated, with phone users getting a firmware update via iTunes and Touch users getting some apps previously only available on the iPhone. In addition, Apple introduced movie rentals, with Apple TV owners looking for a soon-to-be released software update that will give them the ability to rent movies directly through the device without using their computer. Also new is Time Capsule, a full featured WiFi base station that doubles as a backup device for laptops.

But our trend discussion today centers around Apple's new notebook computer, the MacBook Air. Apparently it closely matches previously leaked information from the Gadget Blog at Wired just a day before being announced.

This new notebook got me thinking about how it may effect technology trends, particularly, of course, in the area of mobile computing. Will the Air cause any shift? Will other manufacturers feel obligated to either change current products or enter the fray, introducing their own notebooks?

For me, the attraction to the Air is its compact, clean look...typical Apple hardware development. Would you expect a notebook from Apple to look any different? Of course not. But does it break new ground? Light weight is an assumed feature to notebook computers. Road warriors (i.e., business travelers) want light weight computer hardware as they travel from airport to airport. They should be attracted to it. Will they replace their current PC notebooks with the Air is the question. Typically, business people are using company provided laptops, with PC's being the standard in the corporate environment. Will a corporation allow a few "rogue" staffers take on a Mac laptop as their computer of choice? Hard to say. Apple really hasn't made any inroads into the corporate world. IT support staff would push back the most as they face supporting a platform they are unfamiliar with even though Mac IT costs are usually lower than a PC's. And I think the suits upstairs would side with their support staff. Not only is the Air a Mac, but it does not have a built-in CD/DVD drive. Apple has provided software that allows the Air to share an optical drive in a Mac or PC located nearby, using a wireless connection to access the disk to install software. All the IT folks see is another step in trouble shooting a faulty system or installing new software.

I think Apple, from a development standpoint, has hit a home run. An extremely thin, light weight and powerful laptop that should meet the needs of most road warriors. Heck, they got Intel to reduce the size of the Core 2 Duo processor! Who else but Apple could pull that off? Aside from the innovations, it's still just another notebook computer. It won't grab the attention of buyers like the iPhone did. It would have been great if Apple had made progress with corporate users prior to the Air's release. Maybe their sales team can use it as a way to get in the door. I, for one, would hate to see it go the way of the Cube.