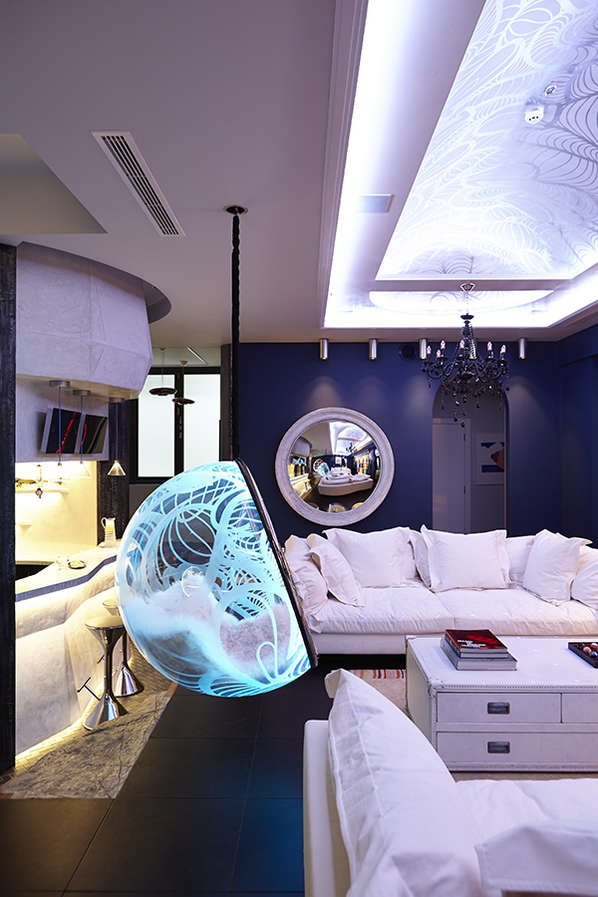 Digging down is the best way to add square footage to an urban property, but all too often these subterranean kingdoms follow a familiar formula, and are nearly always suffering from lack of natural light. This is not the case with the Batcave created by lighting designer Ben Rousseau. The design is packed with intriguing creative ideas, from a bright ceiling with two levels of color-changing LEDs around each step, to a cocktail bar lit up with warm white lights to accentuate the multi-faceted counter.

This design was created for a client who is a connoisseur of cars and 20th century furniture, art and collectibles. The 3,000-foot space needed to showcase his prized possessions. The Aston Martin DB4 is easily viewed from the entertaining / living space of this brightly illuminated basement, and is raised up on a stage surrounded by beams of light that are reminiscent of a protective force field.

The lounge itself features Rousseau’s signature illuminated bubble chair, which is etched with a graphic design by INSA. A snug – a booth with a circular entrance that is also cleverly illuminated – features original Verner Panton wall panels, and has Rousseau Design’s Iris light in red LED as a focal point that complements Panton’s funky, plastic wall bubbles. Even the snooker hall has a light-filled ceiling, so wherever you are in this illuminated basement you never miss the lack of daylight!
3.9
Score
Popularity
Activity
Freshness
View Innovation Webinars