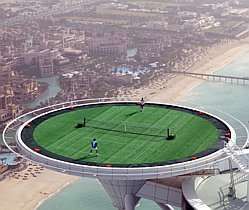 The two players were the first two to compete in the $1,000,000 Dubai Duty Free Men's Open, but alas, the tournament was not held on the roof of this, the world's first 6-star hotel.

Implications - In the travel tourism and sporting industries, innovation is an important element in maintaining consumer interest. Differentiating a conventional product via reinvention is one method of drawing attention and holding this interest. In tourism in particular, travellers want to see something original and unseen as traveling is a costly and time-consuming process.
6.5
Score
Popularity
Activity
Freshness
Get the 2021 Trend Report FREE