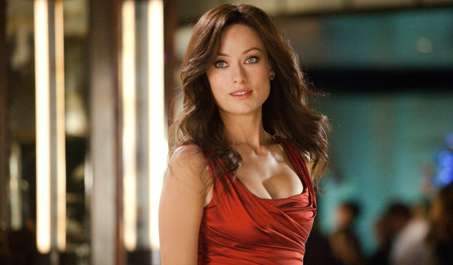 The Revealing Olivia Wilde 'The Change-Up' CGI Dares to Bare

Marie C. Hudson — July 30, 2011 — Naughty
References: thechangeupmovie & gizmodo
Share on Facebook Share on Twitter Share on LinkedIn Share on Pinterest
Nudity in films becomes an even more complex affair in the Olivia Wilde 'The Change-Up' CGI scene, in which computer-generated nipples were added to the star's body for a love scene with co-star Ryan Reynolds. Wilde, who is having an unstoppable year, starring in five films on top of the popular TV series 'House,' wanted to keep it kosher on the set of 'The Change-Up' and opted for the computer-animated solution.

The comedy film set to release on Aug. 5, 2011, includes a bedroom scene between the two actors in which Wilde appears completely topless, despite her wearing pasties during filming. The young actress was asked in post-production to approve a pair of computer-animated nipples for the scene -- a completely innovative and extremely useful feature of modern film production.

Computer-generated nudity was previously implemented to remove Jessica Alba's undergarments for the 2010 film 'Machete,' but this is the first time it has been used for more detailed jobs. The Olivia Wilde 'The Change-Up' CGI nudity might be the first of its kind, but is definitely not the last, as it offers a safe and easy alternative for film actresses.
4.9
Score
Popularity
Activity
Freshness
Get Trend Hunter Dashboard