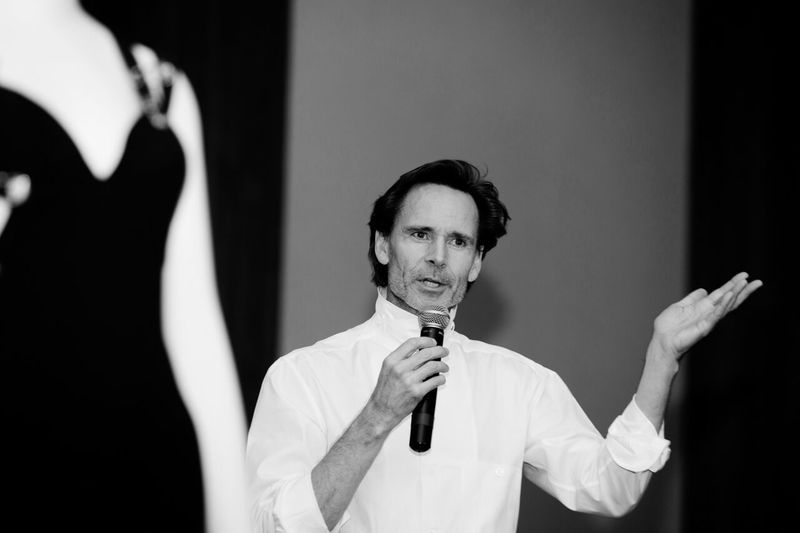 Roberta Schultz — February 14, 2018 — Eco
References: westbankcorp
Share on Facebook Share on Twitter Share on LinkedIn Share on Pinterest
Ian Gillespie is the founder of Westbank, Canada’s leading luxury real estate development company. During the unveiling of the Oakridge Redevelopment project in Vancouver, Gillespie talked to Trend Hunter about the role of innovation in building more livable, sustainable cities and about the importance of promoting the arts as part of our built environments.

How do you identify trends? How do you come about thinking what’s going to be important in the future?

It has to start by education. For me it is about reading. I am a voracious reader and I don’t know too many people that have thought things out and are inquisitive who aren’t readers. I think for me that’s probably where it starts. It is also important to find willing collaborators who are also inquisitive and are unwilling to stop learning. And about having a voracious appetite to be on the forefront rather than the backfront.

Westbank is a real estate development company that has turned into a cultural company. Can you talk a little bit more about that?

A big part of it is my personal journey. There are 1,600 people working at Westbank, but to me it’s a very personal thing. I started it 25 years ago trying to figure out how I was going to pay the rent that week, and then 25 years later you got this! After working on 50 and more projects I asked myself: so, now what’s next? How can we make a more profound impact on the communities that we practice in? After playing an active role in the built environment, energy and transportation infrastructures, then it came down to culture. We started with public art, and then it evolved into a love of live music, fashion and couture, and now dance. To my knowledge, I am the only developer, if not in the world then most certainly in North-America, that has a full-time team that does nothing but look at art projects. And I put a great deal of personal time and we put a great deal of resources into that. To me, these projects are jewels that Canada has that we can help support. It’s about investing in young entrepreneurs who I think have a lot to offer. To me, that’s a natural evolution of our business.

Westbank is constantly partnering up with artists of all fields. How do you think that these interactions foster innovation within the community?

If you look at the work that we’re doing with Rodney Graham and “The Spinning Chandelier” at Vancouver House (Westbank’s new development to be launched in 2019), for example, that will become one of those moments in Vancouver that makes Vancouver Vancouver, just like the 9 o’clock gun. It’s one of those handful of things that makes our city more human, more interesting, a little bit cheeky and gives it a sense of humour. Every artist that I’ve worked with has been incredibly smart and has added something to my life. I’m very attracted to IQ and I have yet to work with a world class artist that didn’t have a world class IQ. And I think that’s one of the things that they bring, they bring an intelligence that makes a city smarter.

Tell us about how you approached innovation in the Oakridge Redevelopment?

There are a few macro-trends that we identified to work on. I think the future of mobility would probably be the first one that we really have to think through because the last thing we want to do is spend hundreds and hundreds and hundreds of millions of dollars building parking stalls that ten years from now are going to be sitting there empty. And if we are going to do them, what are we going to convert that space into when there isn’t a need for a car? How do you design a structure that has that built-in flexibility? We thought about the 40 million people a year coming to visit us at Oakridge and about how they will be getting there. We had to reflect on the ways people are commuting as well as on the future of the autonomous vehicle. The single family vehicle is a luxury that society has paid a fairly high price for, and I think that someday mobility is going to be flipped on its head and I’m really excited about it.

I think another trend is district energy, and more globally, figuring out how we reduce our GHGs in our built environment. Roughly a third of the GHGs that are produced are from the built environment, so we had to ask: how can we do better? Starting with Tellus Garden, we built a project that is 90 off the energy grid. That stimulated me to buy our Vancouver’s District Energy System, Central Heat, and now it’s called Creative Energy. We’re proposing to do a fuel switch, which would reduce emissions by 80,000 tonnes, the equivalent of removing 14,000 vehicles from the road and making a major dent in the city’s GHG emissions. I think there’s reason to be optimistic about that and I say that knowing that this is the crisis of our generation.

I think another trend is this idea of urbanization. We’re becoming more urban, a quarter of Canada now lives in Vancouver or Toronto; in 2040 a third of Canada will live in Vancouver or Toronto, and forty percent of our GNP will come from Vancouver and Toronto. We’re densifying existing cities; it’s not like we’re building a new city in the middle of nowhere. Oakridge is a perfect example of repurposing 30 acres of mostly surface parking lot to 10 acres of park with thousands of trees and thousands of people living there utilizing district energy and supporting transit. You have to think about the evolution of it all, we’re a young city. Vancouver is a hundred and thirty years old.

Yes. This is my first time in Vancouver, and I was actually noticing that the streets here are very wide because they weren’t made for pedestrians, they were made for cars. To me that’s a weird concept, I’m not used to newer cities, mostly because whenever you’re walking down an older city you get a sense that the infrastructure was not meant to be like it is today.

And now we’ve got to fix it. And that’s exciting, because it’s going to get better and it’s going to get more livable, and there’s so much to be optimistic about from that perspective. We just need to do it thoughtfully, and we need to do it now. As Canadians, a criticism that we hear quite often but deservedly so, is that we shoot too low. I think we could afford to be a little bit more audacious.
6.2
Score
Popularity
Activity
Freshness
Get Better and Faster