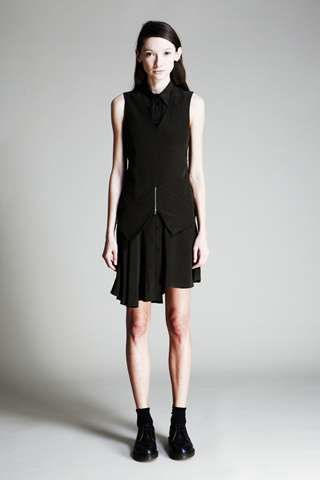 Similar to the brand's Spring 2012 runway show, the Pre-Fall offering is full of striking black and white pieces in loose, forgiving cuts and fuss-free silhouettes. There are no slinky, Kardashian-esque dresses to be found here.

Instead, designer Wayne Lee captures an Alexander Wang essence in her clothes, not only making them effortlessly chic and absolutely wearable, but also giving them a look of downtown edginess that "it girls" everywhere will fall in love with.

Paired with stark black patent leather clunky flat shoes and no-nonsense hair, the Wayne Pre-Fall 2012 collection is able to shine on its own, in all its minimalist glory.
3.7
Score
Popularity
Activity
Freshness
Get Trend Hunter Dashboard