Popular is Not Cool

Constantly Seek to Be Unique

Innovate Inside the Box
Next
Set of
Related
Ideas 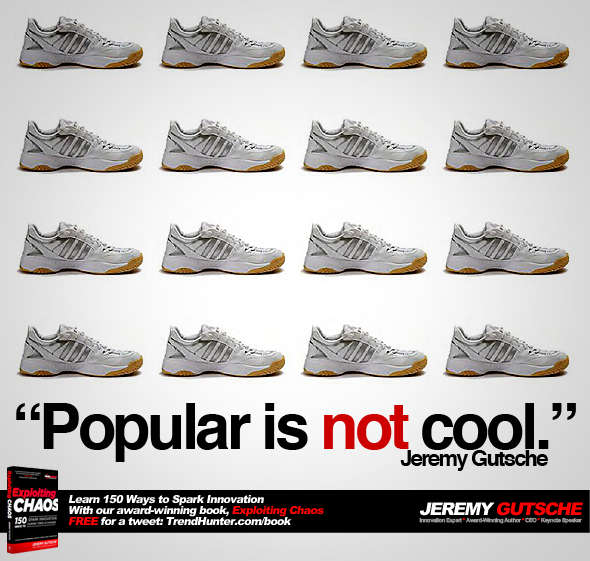 Jaime Neely — March 18, 2013 — Business
References: jeremygutsche
Share on Facebook Share on Twitter Share on LinkedIn Share on Pinterest
Innovation keynote speaker Jeremy Gutsche discusses how to create viral products and constantly reminds his keynote audiences that popular is not cool. Cool, he argues, is unique and edgy. A product or service becomes cool because it has the power to, and does go viral. He suggests that the eccentric and often unexpected products are the ones that become successful. He provides a number of fascinating examples in his award-winning book 'Exploiting Chaos' -- which you can read for FREE here.

The most interesting example is Crocs Footwear.

"At the 2002 Miami Boat Show, Crocs sold out of their first inventory of just 200 pairs. The plastic shoes were so ugly that they inspired a website called ihatecrocs.com where people glamorize the destruction of the hideous shoes. And thousands have joined Facebook groups dedicated to hating Crocs. Despite the hate, Crocs sales grew from $6,000 at the boat show to a peak of $850 million in 2007."

In this cases, Crocs were actually very unpopular among some groups, but their uniqueness and truly one-of-a-kind characteristics made them a huge success.
5.6
Score
Popularity
Activity
Freshness
Get Trend Hunter Dashboard