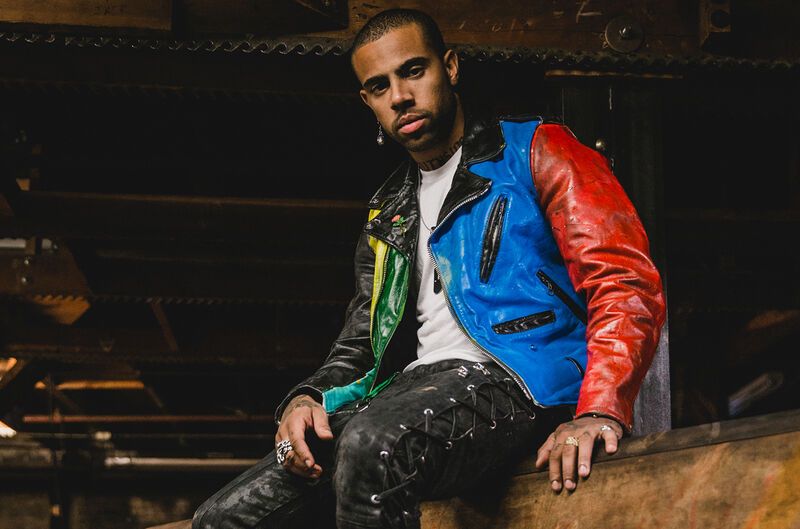 Amy Duong — May 15, 2019 — Business
References: wolverine & vicmensa
Share on Facebook Share on Twitter Share on LinkedIn Share on Pinterest
American hip-hop artist and activist Vic Mensa grew up in Illinois, Chicago and he incorporates his heritage in the many areas of his creative career. He is a musician signed to Roc Nation and the founder of SaveMoneySaveLife. Mensa has worked closely with Kanye West, Travis Barker, Tom Morello, Skrillex, and more. Some of his plans at the horizon include releasing music through ‘93PUNKS,’ which is also a new fashion label he launched and the collaborative footwear collection alongside Wolverine.

The city of Chicago is the root of who Vic Mensa is, and he makes that prominent through his music, his style, and activist work. The collaboration with Wolverine represents that as the gritty designs reference his many style influences and his foundation will receive a portion of every pair sold.

We chatted with Vic Mensa about his latest work with co-creating a line of footwear, his personal style, and his foundation.

Can you tell me a little bit about how you approached the collaboration with Wolverine? What made it stand out to you?

In Chicago, which is my hometown, we went to a leather factory called Horween Leather to pick out materials. I do a lot of work with leather jackets with my line which is called 93PUNKS, it’s a company and album that is on the way out. So, we have been working with leather a lot and pretty much all I wear is boots and there came the opportunity to work with Wolverine, that was exciting for me. I was able to pull my personal style into the Wolverine collection and bring a lot of the punk aesthetic that I'm drawn to into the design of these shoes to create a boot-inspired sneaker.

How would you describe your personal style? How is this integrated into your designs?

You know, I wouldn’t describe my personal style like somebody else would, I’ve always been very informed by street culture, skateboarding, or rock n roll, Guns N’ Roses. The Clash has always been one of my biggest style influences, Malcolm McLaren, and big industrial influences, I draw inspirations from a lot of areas and make it my own.

Are there any specific rituals you have to reset creatively or reconnect with yourself to find new inspiration?

I try to keep meditating, that’s how I reset, and just watching documentaries, searching the internet for new visuals, and I collect a lot of art books as well, which is where I draw a lot of visual inspiration from.

What prompted you to start SaveMoneySaveLife? How has it grown since its inception?

I decided to start the foundation because I was doing a lot of work with the community at the front lines, like bringing in Chicago activists to stand up and bridge that gap of intersectionality. I was already spending a lot of time in Michigan, Baton Rouge, working with schools, especially in Chicago. With all that, people around me pretty much brought to my attention that I spend so much time and money involved with these activities already, that I should just expand and make it a real organization to have more impact overall.

How would you say Chicago has shaped your passions and affected your work?

Everything I do comes from Chicago, its where I’m from and what I know and made my world. I come from a good family and a nice home and it shaped my perspective of how I view the world with, being in my position. With all that behind me, I can see a disparity between the haves and the haves not which is blatantly clear to me and that’s something that made me ask questions and for me, creativity is all about asking questions and searching for answers.

Do you plan on working SaveMoneySaveLife into other fashion collaborations in the future?

I try to keep a community-centric approach and to always keep that present in my mind, whether its specifically collaborating with the foundation or creating in a way that makes people think, which is something I try to involve in everything I do and through my work.
5.2
Score
Popularity
Activity
Freshness
View Innovation Webinars