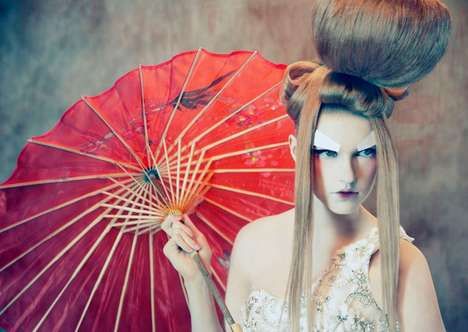 The To Dream of Japan Series is Exotically Modern

Meghan Young — July 11, 2011 — Fashion
References: behance.net
Share on Facebook Share on Twitter Share on LinkedIn Share on Pinterest
There is a severity about the To Dream of Japan photo series that makes this shoot incredibly stylized. Instead of focusing on the serenity of Japanese culture and the sophisticated and subdued nature of the Geisha tradition, this collection of images has a very modern edge to it.

Shot by fashion photographer Tina Patni, the To Dream of Japan photo series is softly shot despite its bold makeup looks, which viewers have makeup artist Gene Ginno Alducente to thank for. The resulting contrast really catches the eye, drawing it to the faces of both models, then to the pops of color in the props used and, finally, to the sparkling gowns provided by Amato Haute Couture. The hair was styled by Jojo Padua.
6.3
Score
Popularity
Activity
Freshness
View Innovation Webinars