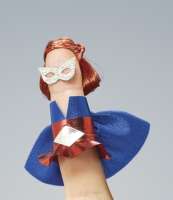 Each costume set is fairly detailed, and portrays just enough about each hero to imagine what awesome superpower they possess. All original superheroes, one can’t help but wish that they could watch Tamara Mayne’s miniature defenders in action. In what is a certain exception to the male-dominated superhero world, three of the seven heroes appear to be superwomen.

Complete with shiny latex, tiny masks and even heroic statures, these finger-friendly costumes bring the fun of fantasy on a smaller scale. With names like ‘Voltage Woman,’ ‘Angle Man’ and ‘Rocket Woman,’ what’s not to love?
3.5
Score
Popularity
Activity
Freshness
Attend Future Festival