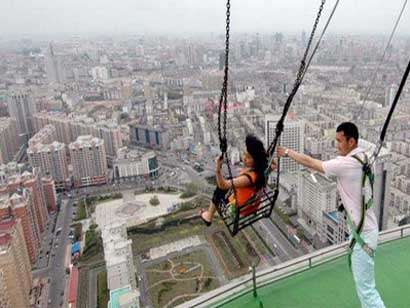 Jeremy Gutsche — May 13, 2007 — Lifestyle
References: gizmodo
Share on Facebook Share on Twitter Share on LinkedIn Share on Pinterest
A radio tower in Harbin City, China has installed a 700 foot swing. Swingers start at the peak of the tower, which is 1,100 feet off the ground. The tower is actually the world's second highest steel tower, so it's probably a good rush. It's also exciting because this ride brings an amusement park rush to an urban environment... In other words, this isn't Disney Land...

The ride is aptly named, "Game for brave people."

Unfortunately, there doesn't seem to be a video on the net yet, so I've included a video from a smaller swing, which is 1/3 the height. Even that swing is rather intense.
6.3
Score
Popularity
Activity
Freshness
Jeremy Gutsche Keynote Speaker

Branded Mayo Ambassadors
Kraft Mayo is Looking to Fill a 'Mayodorsement' Contract worth $10,000

35 Swings and Hammocks
From Sculptural Swings to Stylish Furry Hammocks