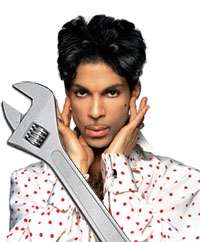 Prince to Sue Diminishing Fan Base For Copyright

Jeremy Gutsche — November 7, 2007 — Pop Culture
References: news.bbc & techcrunch
Share on Facebook Share on Twitter Share on LinkedIn Share on Pinterest
Here's an idea: instead of relying on the RIAA, sue your fans directly! In the past, long ago, Metallica stepped up to the courtroom with some of their fans, then the RIAA started suing music lovers, and now Prince has taken actions into his own hands.

At first, Prince was suing YouTube, Pirate Bay and eBay for copyright infringement. However, he has now teamed up with Web Sheriff to identify fans violating Prince's copyrighted album covers, lyrics, music and images of him in concert.

I really like the way TechCrunch put it, "For some fans this sort of one-on-one attention from their idol will be a dream come true, but for the majority of Prince's ever decreasing fan base, being sued ... won't be welcomed."

Believe it or, Prince isn't the only one kissing his fan support goodbye. Last week we reported that J.K. Rowling was suing a fan site due to copyright violations as well: