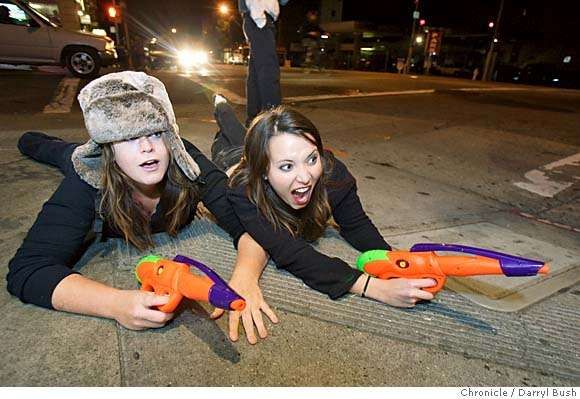 Jeremy Gutsche — September 29, 2006 — Unique
References: streetwars.net
Share on Facebook Share on Twitter Share on LinkedIn Share on Pinterest
Imagine a real life assassination game in the streets of your city. In April, we introduced you to the Street Wars Assassination game in LA. Then it came to London, and now it's in NYC. It's 6 months latesr, and this trend has officially picked up.

What's it all about? Over a 3 week period, you could have a chance to see what it's like to be a water gun assassin. Sounds safe? If you're interested in the thrill of will surely become a national cover story, then you should register for the event. You get the name and address of your target, and then you're on the prowl. The last to survive wins all the cash.

From the Street Wars Site:
StreetWars is a 3 week long, 24/7, watergun assassination tournament that has already taken place in New York City, Vancouver, Vienna, San Francisco and is now coming to Los Angeles.

At the start of the game you will receive a manila envelope containing the following:

You can hunt your target down any way you see fit; you can pose as a delivery person and jack them when they open the door, disguise yourself and take them out on the street, etc.

If you are successful in your assassination attempt, the person you killed will give you their envelope and the person they were supposed to kill becomes your new target. This continues until you work yourself through all the players and retrieve the envelope with your (or your team's) picture(s) and name(s). Then you win. Cash:but first live in fear.