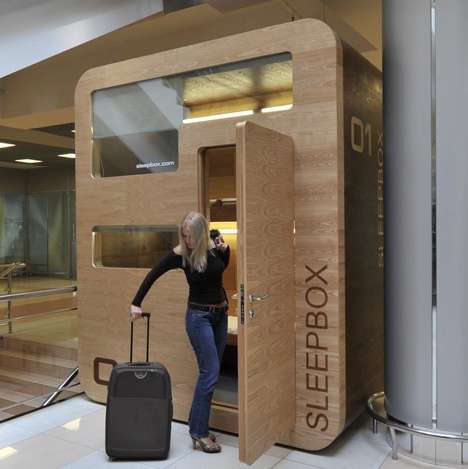 The SleepBox Debuts in International Airports Around the Globe

Omar Yusuf — September 14, 2011 — World
References: arch-group.org & treehugger
Share on Facebook Share on Twitter Share on LinkedIn Share on Pinterest
When Trend Hunter announced and covered the SleepBox two years ago, the product was still in its infancy; a rash business idea that, although intriguing, might never work. Today, that same venture not only sees the light of day, but also promises to radically change the hotel and hospitality industry.

Doubts abounded about whether a small, 15 minute hotel would be used appropriately. Thus far, the SleepBox installed in the Moscow Airport hasn't been misused and has received nothing but positive reports from passing travelers. Since prototyping, developer Arch Group has changed the construction material from plastic to wood, and the minimum reservation from 15 minutes to a half-hour.

Airport benches are notorious for their unergonomic design, making layovers considerably tougher to endure. But layovers aren't the only problem the SleepBox hopes to conquer. Arch Group intends to introduce these personal motels throughout the city of Moscow.
4.9
Score
Popularity
Activity
Freshness
Get Better and Faster