Top 40 Furniture Ideas in May 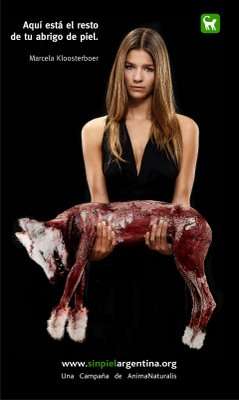 Skinless Argentina 2008 Shows The Other Part of a Fur Coat

Gabriela Aizcorbe — June 19, 2008 — Tech
References: sinpielargentina.blogspot & clarin
AnimaNaturalis, an international organization dedicated to defending animals, seem to have taken note that a picture is worth a thousand words.

Their campaign shows actress Marcela Kloosterboer with serious gesture and with her two hands holding a skinned fox.

On one side, the slogan: "Here is the rest of your fur coat".

This is the second campaign that makes AnimaNaturalis in Argentina against the use of animal skins (the previous one was last year). "But it's the first we did with a celebrity," noted Veronica Cerrato, director of the organization in Argentina. She continued, "With the campaign hope to raise awareness and stop using fur. Many people seem to ignore how the skins are achieved."
5.9
Score
Popularity
Activity
Freshness

243 Ad Campaigns and PSAs That Really Get Your Attention