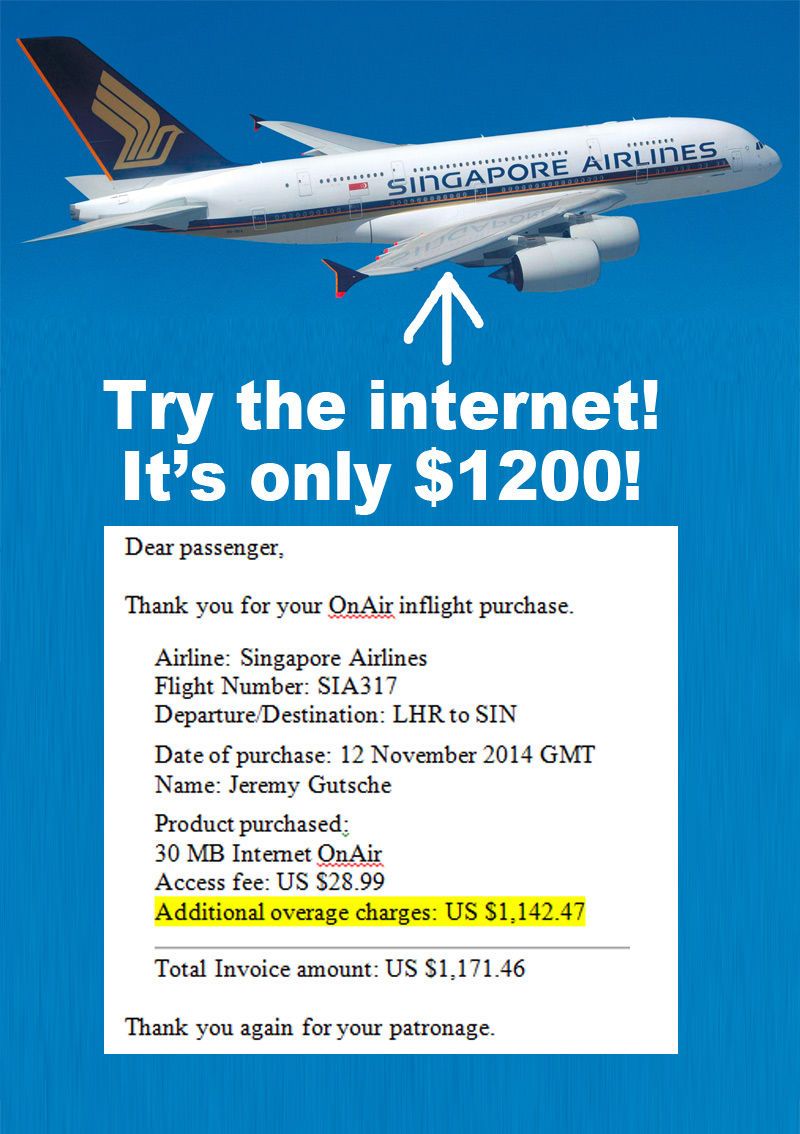 Singapore Airlines Billed Me $1200 for The Internet

Jeremy Gutsche — November 12, 2014 — World
References: trendhunter
Share on Facebook Share on Twitter Share on LinkedIn Share on Pinterest
You know that epic feeling when your flight ends and you finally get to your destination? Now imagine taking those first steps off the plane, syncing your phone, and getting a $1200 bill for airplane internet use. That's what happened to me on Singapore Airlines today.

I had an otherwise enjoyable flight, but the sticker shock of being gouged $1200 made me feel like I was deplaning from Total Bastard Airlines, that old skit from SNL where they kick you off the plane with a "Buy BYE!"

So what does it take to rack up $1200 of internet use? In my case, just 155 page views, mostly to my email. I know this because for the first time I counted up my page views to see where all the dollars went. I wish I could blame an addiction to NetFlix or some intellectual documentary that made me $1200 smarter. However, the Singapore Airlines internet was painfully slow, so videos would be impossible and that means I didn’t get any smarter… except about how to charge a lot of money for stuff. I did learn that.

At one point, I spent about an hour uploading one 4mb powerpoint doc. That doc probably cost me $100 to upload, so I hope my team liked it. I actually even emailed them a warning that my upload was taking a while. That email probably cost me $10. And yes, the pricing per mb was disclosed on sign-up, but I bought the $30 package, slept through most the flight, and really didn't think I'd end up a thousand bucks past the limit.

I can think of a lot of other things I'd rather spend $1200 on, like a flight… to Singapore! But alas, I've already done that and the flight ended up costing WAY more than expected. ;)

P.S. Shouts out to the Shangri La who welcomed me to my hotel with a note explaining that the internet HERE, is always free. Meanwhile, no replies from Singapore Airlines. Tweet ‘em this story if you want them to stop gouging internet users: @singaporeair
6.9
Score
Popularity
Activity
Freshness
Attend Future Festival