Don't Let the Failure of Others Reinforce Inaction

Innovate Inside the Box
Next
Set of
Related
Ideas 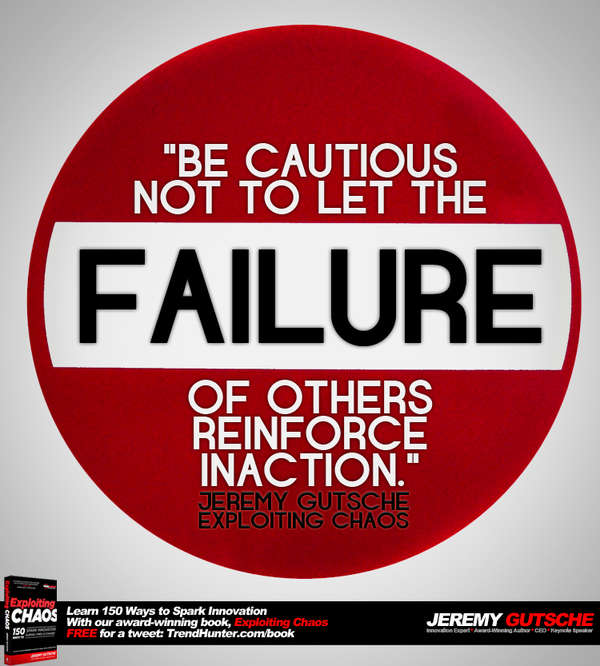 Jaime Neely — March 8, 2013 — Business
References: jeremygutsche
Share on Facebook Share on Twitter Share on LinkedIn Share on Pinterest
Innovation keynote speaker and award-winning author Jeremy Gutsche offers his readers and audiences a variety of proactive business tips. His philosophies are deeply rooted in taking action, behaving proactively and seizing opportunities. In his book 'Exploiting Chaos' -- which you can read for FREE here -- he tells readers to "be cautious not to let the failure of others reinforce action."

To explain this idea further, he uses typewriter company Smith Corona as an example. In the 70s, Smith Corona was making huge profits as the world's best typewriter company, and despite the introduction of computer word processors, it was hesitant to get involved. The failure of a competitor that tried its hand confirmed Smith Corona's decision to stay put.

"Remington was the first manufacturer of typewriters and one of Smith Corona's fierce rivals. In 1950 Remington did get into computing. But by 1975, the company started to falter. The computing division was sold off and by 1981, Remington Rand declared bankruptcy. They would no longer be making giant computers.

This catastrophic failure lingered in the minds of Smith Corona managers. Remington Rand had been an icon, an icon with a similar heritage. If Smith Corona expanded into new, uncertain markets, maybe they would inherit the same fate."

Just because one company fails at something, does not mean that another company should hesitate from having its own go. Jeremy encourages businesses to look beyond the failure of others as a strategy to avoid missing new and exciting opportunities.
5.4
Score
Popularity
Activity
Freshness
View Innovation Webinars