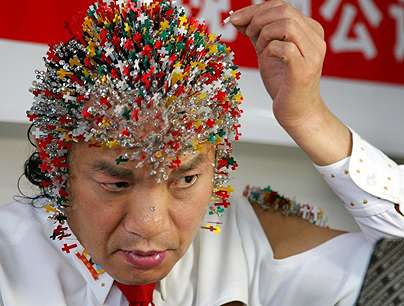 Bianca — June 5, 2008 — Art & Design
References: telegraph
A Chinese man turned himself into a real life pinhead, not as a demonstration of mind over manner or some twisted form of acupuncture, but as a PR stunt to promote the upcoming Olympics. Dr Wei Sheng used his head as a pin cushion, shoving in needles with heads in the five colours of the Olympic ring.

The real life pinhead went beyond his scalp, sticking the needles into his face, chest and hands. In 2004, Dr. Sheng actually stuck 1790 needles into his body which won him a spot in the Guinness World Records.

"Another Chinese man had the symbol of the Beijing Olympics tattooed on his forehead, the Games' mascots on his chest and neck and various other images, including dragons and the Great Wall of China, tattooed all over his body," the Telegraph says.

Since piercings and tattoos are highly taboo there, this is sure to drive controversial discussion, but it's a fantastic portrayal of the extreme heat of Beijing Olympic fever.
4.7
Score
Popularity
Activity
Freshness