Seniors on the Catwalk 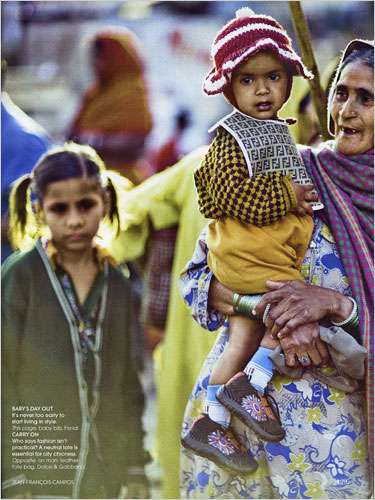 In the August edition of Vogue India, images from a photoshoot in Rajasthan put clearly impoverished looking people in haute couture. Accessorized in luxury goods and opulent fashion, the images that are clearly meant to resemble India’s poor have caused quite a stir.

Images include one of an elderly couple outside a mud hut, he with a Burberry umbrella, and she flaunting an Etro bag.

“Putting expensive necklaces around the poor women is like spitting in the face of the poor,” said Kanika Gahlaut, a columnist with India’s Mail on Sunday newspaper. “Some Indians now live in bubbles, celebrating their wealth and totally de-sensitised to the poor.”

The editor of Vogue India, Priya Tanna, backed up the controversy by saying, “As with any other creative pursuit, fashion feeds and thrives on fantasy, aspirations and above all fun,” she said, adding that it was a shoot “that we are extremely proud of and consider to be one of our most beautiful editorial executions”.

Later she added, “You have to remember with fashion, you can’t take it that seriously. We weren’t trying to make a political statement or save the world.”

Shock it does, but look at the attention it’s getting. Before today, I never even knew of Vogue India…

Before you take off, check out the aforementioned gypsy show as well as seniors on the catwalk.
5
Score
Popularity
Activity
Freshness
Attend Future Festival