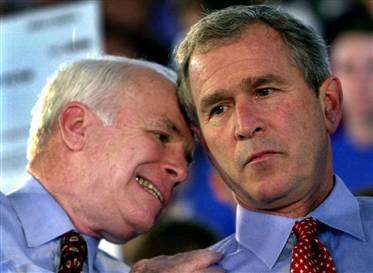 The first killer clip comes a speech at Google.  When asked about his performance as a student, John McCain notes that he was the “5th from the bottom of [his class]”.  That’s 894th out of 899.  It’s also interesting to listen to McCain stumble through his answer.

The second clip, which is being referenced by Obama, is about John McCain being computer illiterate.  When asked if he was a PC or a Mac guy, he noted, “I’m, I am a, uh, illiterate that has to rely on my wife for all the assistance that I can get.”

So I guess this leaves America faced with a dilemma: elect (another) computer illiterate ‘d’ student, or a Harvard Law graduate.  Tough choice.

Pokling fun at McCain, a new Obama campaign notes, “He admits he still doesn’t know how to use a computer, can’t send an e-mail, still doesn’t understand the economy, and favors two hundred billion in new tax cuts for corporations, but almost nothing for the middle class.”